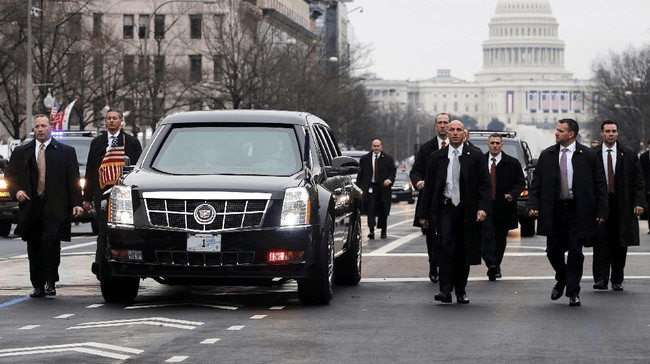 1. Cadillac One – Donald Trump (current President of the United States)

The luxury car used by the number one person in the United States is indeed a secret safety facility. However, like the cars of previous presidents, Trump’s Cadillac One is definitely equipped with bullet-proof body and glass, tear gas shooters, and a blood supply for emergencies.

This Cadillac One is also not the first time Trump has used it. Previously, in the 80s, Trump and Cadillac also collaborated to produce two cars nicknamed “Cadillac Trump”. Apart from being owned by Trump, one other car was purchased by a British national.

In addition to this Cadillac One, Trump also has a 1956 Rolls-Royce Silver Cloud, a 1997 Lamborghini Diablo, a Mercedes-Benz SLR McLaren 00s as well as a 24 Karat Gold Chopper.

Like Trump’s Cadillac One, the British Jaguar PM also has a security system that is no less sophisticated. The car, which carries a 5.0 liter supercharged V8 engine, is equipped with a body made of aluminum, kevlar and high-strength steel.

Not only that, the Jaguar Sentinel will ensure May is safe from grenade, ballistic B7, and other explosives up to a force equivalent to 15 kilograms of TNT. Accompanied by the supply of oxygen, Jaguar wants to ensure that this luxury car for British officials has an excellent level of safety.

As a leader of the Catholic community, Pope Francis really wants to show his simplicity by refusing to use a car as luxurious as his predecessor used. He chose to use the 1984 output of Renault 4.

When it was first given in 2013, this car was already used as far as 170,000 miles to drive around the Vatican. However, Pope Francis still has the right to use the Mercedes-Benz M Class the pope used to use, which is equipped with a bullet-proof glass cabin.

Predicted as the most expensive car at that time, the Rolls Royce Phantom VI was used twice by the British queen. Equipped with armor that guarantees the safety of the first person in England, this car is even more unique because the classic Rolls Royce emblem is replaced by a statue of St. George.

The king of Iran and the Sultan of Brunei are also rumored to have the same Rolls Royce model used by Queen Elizabeth II.

This luxury car was first purchased and used by Getúlio Vargas, in 1953. As a special presidential car, the Silver Wraith is rarely used by Brazilian leaders outside state events, such as the celebration of independence day.

The car used by Xi Jinping is said to be the most expensive in China today. The design of this car is inspired by the limousine used by the previous Chinese leader, Mao. Priced at around £ 622,500 (IDR 10 billion), this 18 foot long car has a 6.0 liter V12 engine capable of producing 400 horsepower.

On the interior, this car manufactured by the oldest brand in the country features charming entertainment features with a Bose Sound System, as well as a sunflower display on the steering wheel as a symbol of good luck.

When the Japanese Prime Minister only used regular Toyota Century cars , the Japanese empire actually had the right to use the Royal version of this Toyota Century. At a price of around £ 378,000 (Rp. 6.2 billion), the car produced in 2006 has an 8.O liter V12 engine and can only be owned by the Japanese imperial family.

The Phantom model produced between 1950 and 1956 is said to be the most exclusive Rolls-Royce car ever. This car is only produced as many as 18 pieces and is owned by several high-ranking state officials other than members of the British royal family, such as the King of Iraq, King Faisal II, the Prince of Iraq, the Shah of Iran, and the Emir of Kuwait.

This Phantom IV comes with a 6.3 liter engine and can be designed on demand. An example is Princess Margaret asking for an adjustable seat so that she can choose whether to drive alone or as a passenger.

Known as the poorest president in the world, Mujica chose to use his 1987 VW Beetle instead of using the special car of the previous president of Uruguay. Even in 2014, the King of Arabia had bid for the car for US $ 1 million, but Mujica refused.

This car, designed by Bentley and Mulliner in 2002, is the first Bentley product to be used by the British royal family. What is most unique about this car with a 6.75 liter engine is the appearance of the door which can be opened up to 90 degrees, making the queen look more classy and elegant when getting out of her car.

Bentley also stated that this car is made with a special glass that allows people to see the queen more clearly from the outside of the car.

The White Motor Company Model M Steamer made Taft the first American president to use a special presidential car. This steam-powered car costs an estimated US $ 4,000, including one of the most expensive at that time. In addition, Taft also often uses this car to hide from media chases with a car feature that is capable of emitting steam in a certain intensity.

As a figure who is known to be generous and likes to travel around, the selection of a typical London taxi is indeed quite unique. Tupou said that he made London taxis his official car because it made it easier for him to get in and out of the car while wearing his royal outfit.

Only one of the eight Daimler models is still in existence today, which is the one used by the British leader during the last world war. Last year, this classic car was sold for around Rp. 3 billion. Four of the eight cars were destroyed during the world war, one was damaged, and the remaining two were missing.

The Sunshine Special was specially designed inspired by the Lincoln K limousine series. To increase the safety of the president after the Pearl Harbor tragedy, this luxury car is equipped with special bulletproof tires, very thick glass and additional space for weapons.

All of these cars, apart from vehicles, are still historical evidence in each country that the nation is always reminded of

Check out the 2020 Mercedes-Benz Sprinter Review

Google officially launched its Website Builder within Google My Business in an effort to help...

There are numerous ways to promote your content online. In particular, video marketing is becoming...

Your Google Maps listing is a crucial marketing tool for your business. It can help...

Whether you are a freelance photographer, own a hardware store, or have another type of...

4 Reasons Why Your Business Isnt Showing On Google Maps

Here’s 4 Reasons Why Your Business Is Not Found on Google Maps Although location authority...