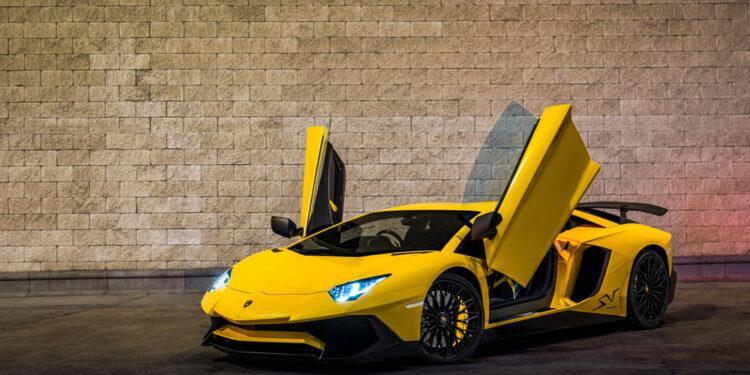 The 2019 Lamborghini Aventador S brings the hammer down on subtlety, offering over-the-top styling to match its over-the-top performance credentials. As the Italian automaker’s flagship, the Aventador embodies the DNA of other legendary Lambos, such as the stunning Miura and the car of every Reagan-era teenage boy’s dreams, the Countach. Powered by a mid-mounted 6.5-liter V12 engine, the Aventador compares well with other supercars from Porsche, Ferrari, and McLaren. The 2019 Aventador S Coupe and Roadster pack 730 horsepower from that V12.
But it’s the new Aventador SVJ that represents the most extreme evolution of the breed. This radical Lamborghini unleashes 759 horsepower and 531 lb-ft of torque to the road through an automated paddle-shifted 7-speed manual. The SV stands for Superveloce (super-fast) and the J is a nod to the classic ultra-limited-production “Jota” Miura of the 1970s. The SVJ dominates most cars in this field. Thanks to its lightweight carbon-fiber body, the Aventador Coupe and Roadster can rocket from 0 to 60 mph in less than three seconds and achieve a top speed of 217 mph.
And the 2019 Aventador SVJ includes an updated version of the active aerodynamics (Aerodinamica Lamborghini Attiva) the company pioneered on the Huracan Performante, which includes movable bodywork to keep the SVJ planted on the racetrack. Lambo says it can add a maximum of 1,100 pounds of downforce. Impressive.
Lambo’s flagship supercar has been around since 2011. That’s an eternity in the sports car world. So, it seems likely the Aventador SVJ will be one of the last special editions of the Aventador before it’s replaced by an all-new model. So as radical as the SVJ might be, it’s hard to justify a price tag of more than a half-million dollars for old technology when something even wilder and more modern could be right around the corner.

The 2019 Lamborghini Aventador S is not only one of the fastest cars in the world, but it’s also one of the quickest, able to reach 60 mph in less than three seconds. That time is achieved when one lets the Aventador’s single-clutch 7-speed automatic transmission and launch control do all the work, although there is a paddle-shifting manual mode if you think you can do better. But be warned, the g-forces this car generates are intense, and every muscle in your body will know it.

Perhaps the most rewarding thing about the Aventador S is the music Lamborghini delivers from that V12. In a quest for improved efficiency, other manufacturers have moved on to turbocharging and downsizing their engines. Not Lambo. Without turbos muffling the soundtrack, the massive V12 can shriek to nearly 9,000 rpm creating sounds so good the hair on the back of your neck will stand at attention.
Various driving modes define the rate of throttle response and ride comfort, with the Road setting being the most civilized, not that we expect anyone will be using the Aventador as a daily driver. Set the knob to Sport or track-ready Corsa mode, and you’ll unleash the Aventador’s full potential. But here’s the thing: Other supercars are lighter and better suited for both back-road hustling or a lap around a racetrack.
The limited-production SVJ trim is geared to deliver a more rewarding track day thanks to active aero and impressive levels of grip. But it’s that even more potent V12, pushing 759 horsepower, that makes the experience. This is one brutally fast machine. In the normal world, far away from the racetrack, the Aventador SVJ will swivel heads quicker than just about any other sports car. It’s impossible not to stare at this thing — and impossible to ignore the sound of that V12 even as the Aventador cruises by at moderate speeds. This is the definitive attention-getter.

The soul of the Aventador is its normally aspirated V12 engine. Our fascination with this engine has less to do with its output and more to do with the sounds it makes (which are fabulous) and connection to Lamborghinis of the past. The V12 is the Aventador’s crucial component.

First seen in the 1970s on the legendary Countach, Lamborghini’s swing-up scissor-style doors help define the brand, as well as add to the car’s design DNA. The design may look odd, but when a car seat sits as low as it does in the Aventador, these doors make it easier to climb in and out.

The worst part about the Aventador’s interior is figuring out how to gracefully slide into the driver’s seat. Okay, so the process isn’t as tricky as a 1980s’ Countach but the 2019 Aventador isn’t as simple as a midsize sedan either. Of course, 700-plus horsepower is certainly worth the effort. Hint? Enter with your backside first while ducking your head and then sweep your legs inside the footwell.
Once inside, you’ll notice the cabin is trimmed with fine materials. Soft Italian leather, Alcantara (depending on the model), and quite a bit of carbon fiber too (if specified). Unlike Lambos of long ago, the 2019 Aventador benefits from switchgear, a heat/vent/air-conditioning system, and electronics that all work flawlessly. That’s because they’re mostly sourced from Audi, which like Lambo is part of the VW Group.
The only downside is that Lamborghini hasn’t updated the Aventador with the very latest-generation infotainment system. Still, we enjoy the jet fighter-inspired interior with bright and attractive LCD gauges, the beautifully sculpted and supportive bucket seats, and of course the missile-launch-style red cover over the engine start button. It’s very Top Gun.

The sleek profile, foot-wide rear Pirelli PZero tires, upswept rear diffuser, arrow-sharp LED taillights and large-bore center exhaust are all unmistakably Lamborghini. The 2019 Aventador SVJ adds even more drama, most notably with that giant rear wing that pays homage to the Countach and Diablo of decades ago. But the influence from fighter jets is everywhere, from the jagged edges around the air intakes to the sharply angled nose.
The Roadster version is barely distinguishable from the hardtop with the roof in place, and those panels remove and stow in the nose within a minute, once you’ve mastered the art. This supercar may have arrived almost a decade ago but even today its design is so sharp, so extreme that it still causes frenzied reactions wherever it goes.

A car costing more than $400,000 should include quite a bit for that price. And Lamborghini does. There are power-adjustable leather seats, keyless entry, heated mirrors, parking assist, voice-activated phone and navigation, airbags aplenty, and the multiple driving settings.

There are also clever Aventador exclusives, like the button that lifts the front of the car about 1.5 inches (40 mm) to help the low, wedgy nose clear steep driveways without scraping that expensive bodywork. The Aventador’s infotainment system is more or less a Lambo-ized version of Audi’s MMI. It works well but this is an older system that could use an update.

There aren’t many traditional options on the 2019 Lamborghini Aventador. Lamborghini gives its well-heeled buyers ample room to customize their cars. Lamborghini leaves very little on the cutting-room floor when it comes to the Aventador. The Ad Personum option lets you customize the color, interior, and pretty much anything else on the car. How far Lamborghini is willing to go depends on how much you’re willing to spend.
Let’s just say with over 40 exterior colors available, it wouldn’t be tough to make one your own. Although there are just two wheel designs, there are eight different finishes. Want a clear or carbon-fiber engine cover? Either one can be yours for just under $8,000. And you can add carbon fiber to your seat, the rest of the interior, or both for just over $12,000. Our favorite? The carbon-fiber and full Alcantara cabin upgrade for around $10,000.

The 2019 Aventador S Coupe and Roadster are both powered by a 730-horsepower, 6.5-liter V12 engine that develops 507 lb-ft of torque attached to a single-clutch 7-speed automatic transmission.
The new SVJ takes the Aventador’s V12 to another level with upgraded internals like titanium intake valves and more aggressive camshafts as well as reduced friction on the pistons and crankshaft, which add up to a whopping 759 horsepower at 8,500 rpm and 531 lb-ft of torque at 6,750 rpm. Those are serious numbers considering Lamborghini achieves them without the use of turbochargers.

Fuel economy isn’t a top priority, but Lamborghini equips the Aventador’s engine with cylinder deactivation that cuts fuel to six of the 12 cylinders under light acceleration and modest throttle input. The engine also features a stop/start system that shuts down completely whenever the car comes to a complete stop, but only when in Strada mode. Still, no matter which Aventador model you choose — fuel economy is dismal. The potent SVJ is rated to return just 9 mpg in the city.

How Much Does the Used 2019 Lamborghini Aventador Cost?

The 2019 Lamborghini Aventador S Coupe and Roadster fall squarely into the “if you have to ask” price category. The Aventador S runs $417,826. The Roadster (convertible) version will run another $42,596 — or a staggering $460,422. But if you have that to spend, why not step up to the new $521,265 Aventador SVJ?
These are also the top Lamborghinis in the company’s lineup, for now at least. Yes, there are limited-edition production competitors from McLaren, Ferrari, and others too. In this world, customers tend to choose both (or all three) cars rather than picking just one. Maybe a more realistic competitor is a nice resort condo, a private helicopter, or perhaps a racehorse.

The Aventador is close to retirement. And its replacement is guaranteed to be just as wild to look at as it is to experience behind the wheel. But this generation of Lamborghini could be the last of the breed when it comes to normally aspirated V12 engine powertrains.

Check the KBB.com Fair Purchase Price to get an idea what others in your area are paying for these supercars.

Check out the 2020 Mercedes-Benz Sprinter Review

Google officially launched its Website Builder within Google My Business in an effort to help...

There are numerous ways to promote your content online. In particular, video marketing is becoming...

Your Google Maps listing is a crucial marketing tool for your business. It can help...

Whether you are a freelance photographer, own a hardware store, or have another type of...

4 Reasons Why Your Business Isnt Showing On Google Maps

Here’s 4 Reasons Why Your Business Is Not Found on Google Maps Although location authority...